In 1866 a little chapel was built near the present intersection of Lacey Road and Highway 530 “for the woodsmen who live in dense forests” and was named the Gibersonville Methodist Episcopal Church. Realizing that Whiting was to become one of the State’s most important railroad junctions, the Presbyterians built a chapel right in town in 1874. Later, when some of the membership of the Presbyterian Church began to move from this area, the chapel was sold to the Methodist congregation and they moved into the building in 1904. This small chapel is where some of our members and their families worshiped for many years.

About 1870 there was a one-room schoolhouse constructed in Whiting, known as the Franklin School House. A second room was added about 1909 and during the depression years a lunch room was added in the rear of the building. After a new school was built in 1954, the church bought the building from the board of Education (1960) to be used for the Sunday School. This building is still in use today, having been renovated in 2017 to include a new heating and air conditioning system.

Due to problems with the Methodist Conference over doctrinal issues stemming from its departure from Scriptural and traditional truth, the entire membership withdrew from what by then was named the St. John’s Methodist Church.

The Whiting Church was begun and chartered in 1964, meeting in Town Hall. After a period of trusting, testing and waiting, the Church and Sunday School buildings were purchased back from the Methodist Conference by the end of the year. With the Rev. William Raws as Acting Pastor, the Whiting Church was dedicated in the Chapel with just over a dozen charter members on February 28, 1965.

The new sanctuary was built and dedicated in 1973. The name of the church was changed to Whiting Bible Church (1977) to give a definite evangelical and fundamental significance to the name.

With continued growth the need for more Sunday School space, a new fellowship/Sunday School wing was built and dedicated in 1992/1993.

Through the years, God has set before us an open door and we welcome people from all types of backgrounds to attend our services. Our task is the same as it was in our beginning… that is: to make disciples for Jesus Christ and to serve God by serving the needs of others.

Please see below concerning our next series of studies in ‘Discipleship’.

These sessions in January will be on “The Basic Principles and Standards for Following Christ”.

Each session will be in the Worship Center with ‘social distancing’ as well as masks to be worn. May the Lord continue to strengthen the body of Christ at WBC. 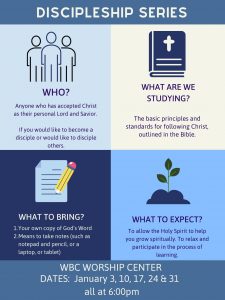